Ala. AG&rsquo;s office re-deputized private firm to avoid legal challenge from BP; Says it has always intended to use firm for trial 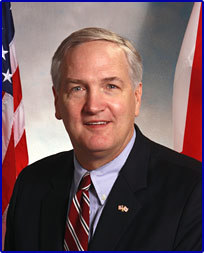 NEW ORLEANS – The State of Alabama has always intended to use private attorneys for a trial in its case against BP over a 2010 oil spill and has been working with a member of a politically connected firm who is on a leadership committee representing private parties, even after the firm saw its initial contract with the State cancelled.

A high-ranking assistant attorney general on AG Luther Strange’s staff recently defended Strange’s decision to re-appoint the private firm Beasley Allen, noting that his office and an attorney at the firm have already been working "side-by-side" on the case for years. Strange had elected to terminate the contract his predecessor signed, but earlier this year re-deputized the firm to avoid any legal challenges BP could make following the firm's initial re-deputation by Gov. Robert Bentley in late 2014.

“These are the guys that we have intended to use for this trial for the past four years,” Special Deputy Attorney General Corey Maze said. “We have been side-by-side with the (Plaintiffs Steering Committee) ever since General Strange took office. We’ve always worked as a cohesive team and there was never any thought of needing to go out and hire outside counsel who have been involved in the case when the guys who have been side-by-side with us in the case doing the work for the past four years were available to help.”

Shortly after the 2010 oil spill occurred, Strange’s predecessor Troy King hired Beasley Allen to represent the State in exchange for 14 percent of any award the State received.

However, when Strange was elected months later he canceled the contract with Beasley Allen, opting instead to use in-house attorneys for the work.

Strange’s tact in the matter has been lauded by those critical of multimillion-dollar contingency fee contracts provided to private attorneys and law firms on behalf of states.

In fact, Strange himself has publicly pointed out the difference between the cost for his legal team to handle the case in-house and that for Louisiana to hire private attorneys. As of 2013, the two different strategies cost Alabama $200,000 while Louisiana had racked $15.4 million in legal fees.

However, earlier this year it was revealed that Strange’s office had re-deputized those private attorneys, all of whom also stand to benefit greatly by representing private parties in the case, to work on behalf of the State in the lead up to a trial that is scheduled for May 2016.

The deputation of the private attorneys occurred only after BP raised an issue about attorneys who had initially been contracted by Gov. Bentley’s office alone, rather than by the Attorney General’s Office, which serves as a de facto representative for the State in legal matters.

Maze, who is lead counsel for the Alabama Attorney General’s Office on the Deepwater Horizon case, said the private attorneys contracted by the governor were deputized to avoid any legal challenges by BP.

“General Strange just made the decision on his own, instead of fighting that particular battle because we have been working with Beasley Allen getting the case ready for all of this time,” he said.

“We have just decided as the Attorney General to go ahead and name them deputy attorneys general so there would not be an argument.”

Maze disputed a previous Legal Newsline report that Strange had executed a turnabout in his legal strategy by bringing back the private attorneys, including attorneys from Beasley Allen, to assist their office in the Deepwater Horizon case.

“[T]o say that Luther Strange has had a turnaround about hiring outside counsel is inaccurate,” he said.

“There is no contract between the Attorney General’s Office and anyone. We haven’t agreed to pay anyone.  We haven’t contracted with anyone. We simply issued deputy attorney general letters to give them the formal designation so they can appear without argument from BP.”

Instead Maze characterized the deputations as a continuation of a preexisting relationship stretching back at least four years.

While Maze and the Alabama AG’s Office admit to maintaining a close relationship with outside law firms, they vehemently oppose the idea that those attorneys will receive money from the State for their work.

“That would be an additional payout, not something that the State ever paid them.”

Instead, the details of possible financial benefits for outside attorneys contracted by Gov. Bentley’s office and working with Strange’s office are not yet defined. Legal Newsline obtained a contract for Rhon Jones, a partner at Montgomery-based Beasley Allen and member of the Plaintiffs’ Steering Committee, through a Freedom of Information Act request.

That contract, which received the blessing of Strange, stipulates that private attorneys such as Jones who are deputized to work on behalf of the State will potentially receive a windfall at a later date for their work.

“Rhon Jones and Beasley Allen may seek to have their reasonable attorney’s fees, costs and expenses paid by one or more of the parties responsible for the State’s damages. Alternatively, Rhon Jones and Beasley Allen may be compensated for their efforts based on their time, expertise and contribution to the success of the litigation or negotiated settlement by applying for reasonable attorney’s fees,” the contract states.

Thus, when the trial or settlement between BP and the State of Alabama comes to a conclusion, private attorneys and law firms such as Jones and Beasley Allen will likely petition the court for their fees to be paid. While those fees would not come directly from the State, they would be for work done on the State’s behalf.