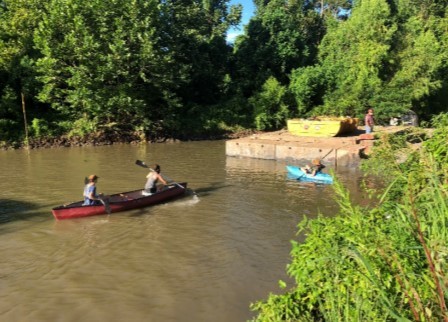 The three protesters are challenging a Louisiana law that went into effect last year that makes it a felony to enter "critical infrastructure" without prior authorization. Critics of the law say it stifles the right to protest, while supporters say the law is designed to both protect vital infrastructure and keep people safe.

"This important law protects Louisiana and its citizens from individuals who attempt to unlawfully interrupt construction of pipeline projects or damage existing facilities, which not only puts the trespassers at risk but also risks the lives of first responders, employees and the surrounding communities and environment," said Tyler Gray, president of the Louisiana Mid-Continent Oil and Gas Association.

However, the lawsuit asserts that the protesters did not trespass into "critical infrastructure," but remained in a canoe and kayak that were in open water near the pipeline, which is allowed under the new law, which includes exceptions for protests and recreational activities near facilities that would be categorized as "critical infrastructure."

The three plaintiffs in the case, Eric Moll, of Oakland, Calif., Sophie Cook-Phillips, of Sacramento, Calif., and Cynthia Spoon, of Denton, Texas, are seeking compensatory and punitive damages, attorneys's fees as well as a court order indicating their arrests violated state and federal law.

The pipeline under construction at the time of their arrests would transmit crude oil across 163 miles from the Texas-Louisiana border to St. James Parish. Once completed, it will serve as the final link between fracked oil from the Bakken shale fields of North Dakota and the refineries and export facilities of the Gulf coast, according to the suit.

"The Pipeline has been confronted with vehement opposition from environmental activists who argue that its construction greatly exacerbates Louisiana’s coastal erosion crisis," the lawsuit says. "In their view, it could contribute to rising sea levels, leaving coastal communities more vulnerable to hurricanes, in addition to threatening wildlife and contaminating drinking water in the surrounding areas...To silence the growing dissent about the construction of the Bayou Bridge Pipeline, BBP and HUB contracted with law enforcement officials to make felony arrests of protesters of the Pipeline."

Plaintiffs say that protests of the Bayou Bridge Pipeline had taken place prior to August 2018, and in those protests, persons who were arrested were charged with misdemeanors, and released.

Defendants named in the suit include Bayou Bridge Pipeline LLC, as well as a private security company and various local law enforcement officers and agencies as defendants.They are represented by attorneys at Roderick & Solange MacArthur Justice Center in New Orleans.

Gray believes lawmakers did what was necessary to protect the right to protest while crafting a law that would protect key facilities.

"When the state law was crafted in the legislature, there was extensive public debate and careful consideration on the bill’s effect to ensure individuals’ First Amendment rights were not threatened," Gray said.