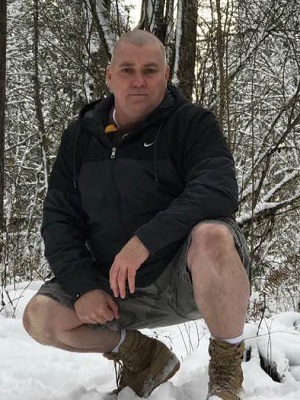 Briggs of Aloha, Oregon, vlogger behind the "World According To Briggs" series of top-ten vlogs | Photo courtesy of Briggs

Louisiana ranks ahead of Illinois, Tennessee, New York, Pennsylvania, Virginia, Ohio, New Jersey, Georgia and Florida, in that order, according to the vlog posted Nov. 8.

"Some Louisiana residents might consider it a victory not to have a new political scandal every single year," Briggs said in the vlog. "Sadly, they haven't had that feeling of a victory in close to 60 years."

Briggs, based in Aloha, Oregon and vlogger on the YouTube channel "World According to Briggs," told the Louisiana Record that he preferred not to use his full name to head off the "wing nuts" vloggers attract.

In his corrupt top 10 states video, Briggs acknowledges the many ways a state can be considered "corrupt," regardless of party, and that no state is free of corruption.

"For that list, I spent a lot of time on the FBI's website and the Center for Public Integrity's website," Briggs said during a Louisiana Record email interview. "That list went by the number of convictions of public officials per total population."

Louisiana came in at No. 1 based on a technicality, Briggs said.

"Washington D.C. would have been No. 1 but it's really not a state," he said.

In the video, Briggs said the basis he used to determine the most corrupt states in the U.S. was the most convictions per capita, issues such as embezzlement, extortion and bribery that those states have suffered for decades "and have done zero to change."

Earlier in November, Briggs also posted the vlog "Top 10 most corrupt cities in the United States." In that vlog, Briggs placed New Orleans, with its "334 convictions for various types of corruption since 2000," at No. 7.

Briggs didn't know until his Louisiana Record interview that Louisiana Gov. John Bel Edwards, criticized by the Wall Street Journal for his part in turning Louisiana into "The Trial Lawyer State," had been elected to a second term.

Briggs did not suggest there is no corruption in his home state of Oregon, where in February of last year an ethics panel found Democrat former Gov. John Kitzhaber guilty on ten state and federal violations.

In a state already known for notorious public corruption cases, Kitzhaber was alleged to have misused his office for financial gain and in March of last year agreed to pay a $20,000 civil penalty to state ethics law violations.

"The Kitzhaber thing was bad, like all the others, in Oregon and across the country," Briggs said. "That video was on conviction per population like I had said. Going by that, Oregon would be one of the better states."

"The thing that really sinks Louisiana is that access to information and judicial accountability remains its worst in the country according to the CPI and others," he said. "That, in my opinion, is the second-worst going on in this country."

Elected officials are more to blame than the state of Louisiana itself, or any state dogged by corruption, Briggs said.

"In theory, this country is all of ours," he said. "Elected officials are supposed to be public servants. Anything that goes on in our government, especially on the state and local level, should be out in the open and easy to find."

Briggs said he is a researcher by profession and often finds it difficult to find information about "governmental dealings."

"That is the real reason we have such a divide and nothing gets done," Briggs said. "Politicians used to be able to make deals. Now the big money funding their campaigns tell them not to budge and they don't. They resort to sleazy moves when they have the power."

Youtube • The Center for Public Integrity • City of New Orleans