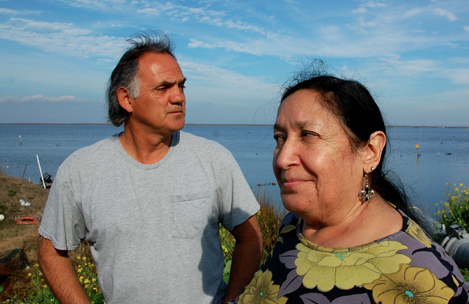 Four coastal Louisiana tribes have turned to the United Nations for intervention as their traditional coastal lands disappear from alleged rising sea levels and erosion.

“Our community could be gone in 20 years," Shirell Parfait-Dardar, chief of the Grand Caillou and Dulac Band of Biloxi-Chitimacha-Choctaw Indians, told The New Orleans Advocate.

The tribes filed a formal complaint with the United Nations in Geneva on Jan. 29. They are hoping for intervention to help them protect their ancestral land in Terrebonne, Lafourche and Plaquemines parishes.

They claim that some of the areas where the tribes have historically lived are already underwater; that communities have been forced to break up and relocate; that traditional sources of food are disappearing and that ribal burial sites are being drowned as sea levels rise.

"We’re not only losing our homeland. We lose so much more than that. We lose our culture. We lose our identity,” Parfait-Dardar said.

Patty Ferguson-Bohnee, a member of the Pointe-au-Chien tribe and director of the Indian Legal Clinic at Arizona State University, said the tribes have turned to the United Nations because the U.S. government has failed to protect the tribes’ homeland – a violation of their human rights.

“The tribes have asked the U.N. to urge the United States to provide new funding to restore tribal lands and hunting and fishing areas. People in Louisiana and Alaska have been forced to relocate. We need assistance to help people stay in their homes,” she said.

The Louisiana tribes that filed the complaint are the Isle de Jean Charles Band of Biloxi-Chitimacha-Choctaw Indians of Louisiana; the Pointe-au-Chien Indian Tribe; the Grand Caillou and Dulac Band of the Biloxi-Chitimacha Choctaw Tribe; and the Atakapa-Ishak Chawasha Tribe of the Grand Bayou Indian Village. The Native Village of Kivalina, an Alaskan tribe, joined in the U.N. complaint.

The Louisiana tribes’ fates are complicated by the fact that none of the four tribes has “federal recognition,” a key legal instrument that could help them in their fight to save their communities and homelands. The U.S. government views tribes with federal recognition as “domestic dependent nations” with inherent powers of self-government.

Ferguson-Bohnee said lack of federal recognition makes it harder for the tribes to protect their ancestral land, secure financial assistance and get a seat at the table as critical decisions are made about how to protect Louisiana’s disappearing coastline.

“Federal and state governments have not done enough,” Ferguson-Bohnee said. “We need intervention by the United Nations.”

Want to get notified whenever we write about United Nations ?

Sign-up Next time we write about United Nations, we'll email you a link to the story. You may edit your settings or unsubscribe at any time.