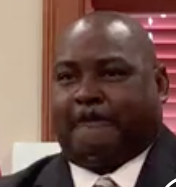 Baton Rouge lawyer Donald Dobbins has a suspended law license but refuses to drop out of the race for a seat on the 19th Judicial District Court.

The Louisiana Supreme Court suspended Dobbins from the practice of law on Jan. 29. Whether Dobbins will be allowed to become a District Court judge if he is elected will be up to the Supreme Court.

Along with having his license suspended for a year, Dobbins was ordered to pay two former clients a total of $4,440 in restitution. One Supreme Court justice declared the sentence overly lenient, saying he would have imposed a three year suspension.

The election is April 4. The other candidates in the race are Greg Cook, Whitney Higginbotham Greene, Jonathan Holloway Sr. and Johnell Matthews.

"I will continue to be a candidate," Dobbins told the Advocate.

Dobbins, who has been practicing law in Baton Rouge since 1991, told the Advocate that he intends to ask the Supreme Court to rehear his disciplinary case.

He said his lawyers have told him that he does not need a law license to qualify for the court seat because judges cannot practice law.

Tyler Brey, a spokesman for the Louisiana Secretary of State's Office, said Dobbins' name remains on the ballot because the time to object to his qualifying had passed before the Supreme Court suspended him.

"It's out of our hands," Brey said. "He will be on the ballot unless a court intervenes."

Trina Vincent, public information specialist for the Louisiana Supreme Court, said that because the Supreme Court rendered a per curiam opinion on Jan. 29, there will be no further comment from the court.

“We are unable to comment on opinions issued by the court,” Vincent told the Louisiana Record.

Speaking anonymously, one former member of the Judiciary Commision told the Advocate that the commission has never faced anything like the Dobbins case.

“It would be 'totally ludicrous' to say a suspended lawyer could run for a judgeship,” the individual said, according to the Advocate.

The Supreme Court said the record supports a finding that Dobbins "failed to provide competent representation to clients; neglected legal matters; failed to communicate with clients; failed to refund unearned fees and unused costs; failed to properly supervise his non-lawyer staff, resulting in false affidavits being filed in the court record; failed to reduce a contingency fee agreement to writing; forged client signatures on settlement checks; and failed to place disputed funds in his trust account."