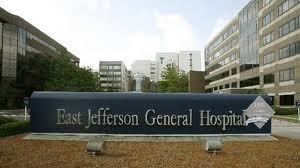 GRETNA – The family of a deceased man is suing a local hospital over an alleged misdiagnosis of severe internal bleeding that led to death.

The Surcoufs allege that Milton Surcouf went to East Jefferson Surgery Center on Oct. 7, 2010 where he underwent a laparoscopic repair of a hernia. The plaintiffs contends that after being discharged form the surgery he was instructed to go home and later that evening after becoming faint, and not being able to urinate, his family took him to the emergency room where his condition was stabilized. The Surcoufs assert the following day they contacted Milton’s cardiologist and told him of the emergency room visit and he told them to put him back on blood thinner medication after which two days later his condition had worsened, he was confused, uncomfortable and pale and his genitals were black and swollen.

On Oct. 11 the Surcoufs took Milton back to the emergency room where it was revealed he had a large pooling of internal bleeding in his pelvic and abdominal area that he was unable to recover from and subsequently died on Oct. 12, 2010.

The plaintiffs are represented by Richard T. Gallagher Jr. of the Metairie-based Gallagher Law Firm LLC.

The case has been assigned to Division J Judge Stephen C. Grefer.