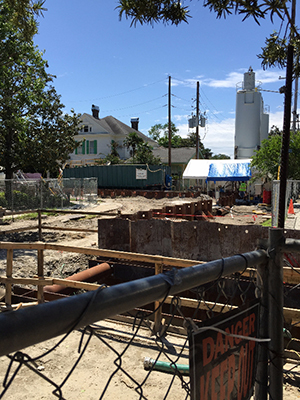 NEW ORLEANS—An attorney representing residents from the historic Uptown and Carrollton districts who are suing the Sewerage and Water Board (S&WB) of New Orleans said this is the second time in the last decade that the city department is facing liability for damages caused by construction projects it has overseen.

Residential and business owners have filed a class-action suit seeking payment for extensive damages to their properties that they allege have been caused by the ongoing Southeast Louisiana (SELA) Drainage Project, which is managed by the S&WB on behalf of the Army Corps of Engineers.

The plaintiffs claim that vibrations caused by the heavy-duty construction equipment, constructing drainage canals, have caused damages to properties that include cracked and failing foundations, sinking floors, and doors and windows that no longer open and close properly. Additionally, the plaintiffs claim that they have been denied full access to and enjoyment of their properties, with parking blocked by construction and excessive, ongoing noise.

Michael Whitaker, attorney for the residents, said the case is similar to Holzenthal III v. Sewerage Water Board of New Orleans. That suit, decided in January 2007 in the Court of Appeal of Louisiana, Fourth Circuit, found that SELA Drainage Project construction overseen by S&WB resulted in damages to properties in the city's Broadmoor district. The court further found that S&WB was financially liable for compensating property owners both for damages and emotional distress.

Whitaker said that despite the result of the Holzenthal case, the S&WB is continuing to utilize many of the same construction methods faulted in the findings of the Fourth Circuit in the SELA work currently being carried out.

“They've followed the same inappropriate construction methods and procedures,” Whitaker said. “During the Holzenthal case, they talked about how the houses surrounding the construction site suffered substantial damage due to heavy equipment vibrations and ground settlement caused by drawing down nearby water wells. The courts found the S&WB liable for the full cost of repair to the homes, and the full cost of repair and replacement of the damage to personal property. It told them exactly what not to do and they ignored it; and they went ahead anyway with the same project, causing the same kind of damages.”

Whitaker said the ongoing construction is causing destruction in a federally recognized historic district and “significant emotional distress” to his clients.

“The pile driving and the other heavy equipment — and we're talking about 70-ton cranes, 18,000-pound dump trucks, etc. — are causing enormous vibrations that are like a series of mini earthquakes, damaging and many times ruining the foundations of homes and businesses adjacent to the project," Whitaker said. "All of these homes are in a nationally recognized historic neighborhood, and many of the homes are 100 to 150 years old. None were built to withstand these kinds of vibrations."

"The equipment generates jet-engine-level noise quite frequently," he said. "These cranes are sometimes less than 15 feet from the front doors of these people's houses. The noise is rendering these homes uninhabitable; there's no place to hide. After Hurricane Katrina, these folks voluntarily returned to their neighborhoods and spent hundreds of thousands of dollars rebuilding their homes and lives, only to have this project roll through their neighborhood and duplicate property damage to their homes after they were just finished.”

Whitaker said that the Holzenthal case sets a firm precedent for his clients' claims for damages.

“It's abundantly clear that the Holzenthal case is controlling authority for the legal claims against the S&WB," he told the Louisiana Record. "The S&WB knows that it is responsible for these damages to these houses. It knows it's on the hook pursuant to the Holzenthal case. Nevertheless it is doing nothing to date to assist the residents or doing anything to mitigate their damages.”

Want to get notified whenever we write about Sewerage and Water Board of New Orleans ?

Sign-up Next time we write about Sewerage and Water Board of New Orleans, we'll email you a link to the story. You may edit your settings or unsubscribe at any time.

Sewerage and Water Board of New Orleans