“The inspector general received information regarding questionable practices by the Jefferson Parish Finance Authority regarding expenditures, governance and other practices,” Inspector General David McClintock told the Louisiana Record of the recently released 2016-0021 Public Audit Report on the authority.

The authority, through a public trust, assists low- and moderate-income homeowners with down payments on their mortgages. 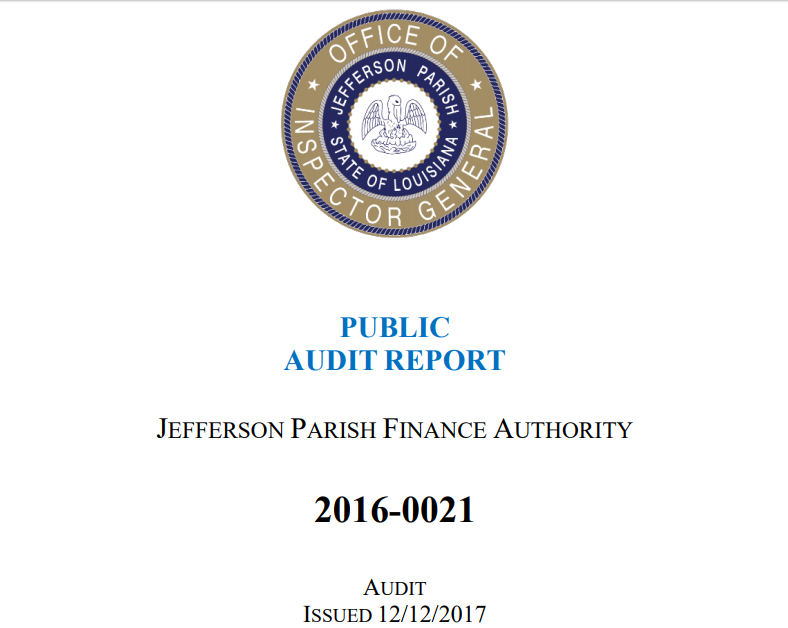 Along with contracts being awarded to contractors who filled elected officials' campaign coffers, the executive director misclassified as a parish employee, travel expenses, parish retirement benefits, professional service fees, questionable operating transfers and lack of self-governance were just some of a dozen incongruities found in the audit.

While some of the discrepancies were acknowledged by parish council members, who agreed to take corrective action, others were not.

The inspector general said it is likely the Jefferson Parish Finance Authority will hire attorneys to explain the questionable audit.

Speaking of attorneys, contributions of hired counsel to political campaigns is in question; however, McClintock said that other than public letters, his office does not publicly opine on matters or issues under its jurisdiction.

“Jefferson Parish Office of the Inspector General audits and evaluates for the purpose assisting government to improve operations, increase accountability and detect instances of fraud, waste or abuse,” McClintock said. “Any findings that are reached or recommendations made as result of this effort is reported upon in a public report.”

"The whole thing is just politics,” Faia told The Times Picayune. “This is all just a game by a few people who want to grandstand. The IG's office wasted 18 months investigating this. Who knows how much money they spent -- and they still got the wrong information."

Another question that will be hard to answer is the parish government putting out bids for Finance Authority positions, specifically to attorneys J. William Becknell II, Rob Konrad and Allison Becknell.

“Jefferson Parish Finance Authority is not a parish department, but a trust indenture that should operate independently,” McClintock said of the dubious bids for positions.

For now, all McClintock can do is wait.

“Jefferson Parish Office of the Inspector General issues original reports with recommendations, and in due course, they may conduct a follow-up audit to determine whether any recommended actions have been implemented,” McClintock said.

Want to get notified whenever we write about Jefferson Parish Finance Authority ?

Sign-up Next time we write about Jefferson Parish Finance Authority, we'll email you a link to the story. You may edit your settings or unsubscribe at any time.