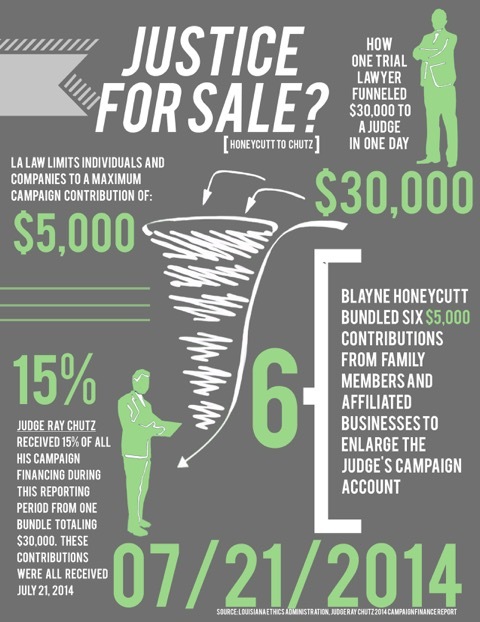 NEW ORLEANS – A non-profit legal watchdog group has raised concerns about a politically connected plaintiffs’ attorney bundling of $30,000 in donations from himself, the attorney’s immediate family members and businesses close to him to deliver to a judge.

The funds were provided from attorney Blayne Honeycutt, a partner at the Fayard & Honeycutt law firm, and those connected to him and given to Judge Wayne Ray Chutz.

At the time Chutz had served as a judge for the 21st Judicial District for 21 years and the funds went toward his election to the First Circuit Court of Appeal, Division A that he won unopposed in August 2014.

The information was revealed in a recent report by Louisiana Lawsuit Abuse Watch (LLAW) which showed that $30,000 in campaign contributions - in increments of the $5,000 maximum contribution limit - were delivered by Honeycutt, his wife and children and two businesses with which he is closely associated to Chutz’s campaign all on the same day, July 21.

Honeycutt’s law firm is based in Denham Springs, one of the several cities covered by the 21st Judicial District that spans Livingston, St. Helena and Tangipahoa parishes – all of which are also contained in the First Circuit Court of Appeal – and where Honeycutt has appeared in front of Chutz on several occasions.

The $30,000 connected to Honeycutt and received by Chutz’s campaign on July 21 comprised 15 percent of all contributions the judge’s campaign received at the time.

“The Louisiana Code of Judicial Conduct effectively bans judicial candidates from directly soliciting campaign contributions from donors. In theory, the friends and family of judicial candidates are supposed to form a committee to solicit donations so that the candidates themselves can be one-step removed from the process,” she said. “But this system is widely recognized as a farce, since judges and judicial candidates have to sign their campaign finance reports where each donation is disclosed.”

Landry said that while Chutz has not appeared to have broken any rules, it should be obvious that such a large donation was meant to influence him.

“You don’t have to be a cynic to conclude that the injection of such a large bundle of cash creates, at a minimum, the appearance of improper influence. What’s more is that this tactic of using massive campaign contributions to influence the outcome of political elections appears to be standard operating procedure for Honeycutt and his law partner, Calvin Fayard Jr.,” she said.

Fayrad is a member of the Plaintiffs’ Steering Committee of the Deepwater Horizon oil spill case who along with Honeycutt has provided more that $276,000 in campaign contributions across the state in the past six years.

“Elected judges can never be truly independent, the Framers of the U.S. Constitution insisted," Baker said. "Attempts to promote judicial independence by limiting campaign contributions are problematic because the limits can be manipulated and they are subject to First Amendment constraints."

However, Baker said that at the very least Chutz should not be able to preside over cases handled by Honeycutt, his family or the Fayard & Honeycutt law firm.

“Personally, I would remove all limits on campaign contributions, but require a judge be recused whenever a party or a law firm, including its members, employees, and their immediate family members, have collectively contributed over a certain amount of money to the judge's campaign,” he said.
(To see the full report at The Hayride click here.)